Bigchemist.com is not like its other counterparts; this site is an Indian online pharmacy which looks and feels like an actual pharmacy. The site did not have the dull textbook layout of products but seems to have presented the products in a vibrant, engaging way. This online pharmacy has been in the business since 2013, and it aims to be the largest pharmacy network in India. Bigchemist.com is an online branch of the company A3T Retails Pvt. Ltd, and caters only to clients located in India only.

According to its store information, the company sells 100% authentic medication from various brands, and only the “highest-grade” substances for health and growth. Bigchemist.com says that it is one of the stores licensed to sell medicines. This site is different compared to the others because the site has a mobile app that can be downloaded from Google Play and the Apple Store for ease of access. This is the first time I have seen a site with a mobile app for phones.

There is no mention of the Bigchemist.com’s FDA approval for its products, but the site sells only from reputable brands. As for the products it sells, the pharmacy sells a lot—the store has medical devices (BP monitors, blood sugar checking), health supplements, baby and mom products, personal care items, and products for sexual wellness. The OTC products here can be bought with ease, but the prescription meds being sold here requires that the Rx’s be sent to the pharmacy. Since Bigchemist.com has a mobile app, clients can upload the prescriptions’ photos in it. Clients may also mail or e-mail their prescriptions but the mobile app option makes it easier for clients to send in their prescriptions since everyone nowadays has a smartphone.

With regards to sexual health products, Bigchemist.com has several items for sale, with them mostly herbal supplements for men and women. I thought that the site does not have pharmaceutical grade ED meds, but using the search function, I have found out that it actually does have them, the products were just unlisted. Viagra by Pfizer costs a mere $9.29 each for the 100 mg tablet and $7.25 for the 50-mg tablet. Unfortunately, the site doesn’t have Cialis or Levitra; but there are numerous Indian-made generic variants for them available. The generic meds cost as low as $0.15 each, for instance, Duraga by Torque, 50 mg (Sildenafil), $0.21 each for Tadalis by Ajanta Pharma (Tadalafil), and $2.24 each Mvitra by Maiden Pharma (Vardenafil). These are really low pricing for the ED meds, and the lowest in all the pharmacies I have been to.

Bigchemist.com ships all orders within India’s National Capital Region for free for orders over $2.97 (Rs 199). The site charges the clients for shipping for only $0.28 to $1.18 depending on the location and the size of the parcel. Shipping takes a mere 3-4 days for small packages, and 1-2 weeks for orders weighing more than 2 kilos. Unfortunately, the site does not ship to international locations as the site currently caters to orders within India only.

Returns are available for clients in this company. Bigchemist.com allows returns of all products within a 14-day period. Non-deliveries and receipt of damaged good were not discussed within the site, but clients can ask the company by contacting Support by sending mail thru the allotted space within the site.

Bigchemist.com has a portion allotted for testimonials. Client reviews were positive for the site, and it seems that the clients were all satisfied with the site’s work. For instance, Bhajan Bhardwaj rated the site 5 stars for its service on December 30, 2015, and said that he is happy to be a member of Bigchemist.com.

Pushpnedra Pratap Singh also appreciated the site’s service and rated it 4-stars. Shiva Shankar Bingi rate the site 3-stars but said that he had a nice experience with the site.

There were a lot more testimonials to read and all of them were from 3 to 5 stars and positive with their comments regarding their experience within the site. Although these are actually good to see, clients must still be careful when it comes to these reviews, as these reviews may just be manipulated by the site, and tailored according to its own interest. 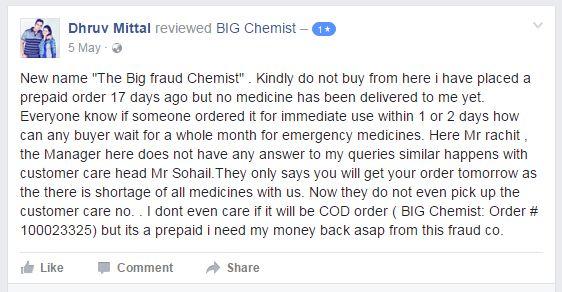 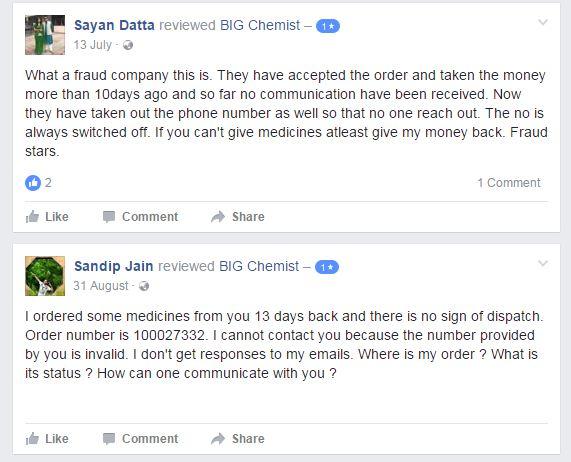 I was able to locate recent client reviews for Big Chemist, and all of them were positive. But since the site also has a Facebook page, I decided to check on it too, as store Facebook page also has reviews posted.

I was stunned to see a flurry of negative reviews for the site, and most reviews were for the current year. A lot of the reviews were directed negatively towards the site and were all complaints regarding the non-receipt of orders. According to him, he ordered August 4, and it’s almost 2 weeks since, and yet no order came. To be fair, the client has already ordered from this site, but this time, the service was really bad that he decided to give the site a poor rating.

The client Sumeet Saigal (posted July 14, 2016) also rated the site poorly and wishes to rate the site lower than a single star, if possible. According to the client, the order did not go through even if it had been several weeks since. The site was also not responding to emails or calls.

Sayan Datta also gave Bigchemist.com 1/5 and said that the company is a fraud. According to him, the company took his money about 10 days since his review but did not communicate after that. The phone number the site gave wasn’t also working, so there’s no way to get his money back.

Sandip Jain shared the same sentiment (posted August 13, 2016), as the site took his payment but he wasn’t able to receive anything from the site. There were no updates regarding the order too, and there’s no way for this site to be contacted.

There are still a lot more reviews posted on the social media site, and the most recent ones were all 1-star reviews for Bigchemist.com. The reviews ought to speak for themselves; the site is a fraudulent one and must not be ordered from.

Despite the negative reviews, this site was given a 92% rating for its safety aspect. Maybe the site is indeed safe to order from, from an algorithm’s perspective, but service is another aspect of the site. the site was indeed safe from predators online, but this rating does not guarantee that the site can give good service to its clients. Good thing there are client reviews for this site, to help potential buyers decide not to buy anything from it.

There are no current promos by this site for its clients. Bigchemist.com has free shipping for orders above Rs 199/$2.97, and it may be availed by clients within India’s NCR region.