Medsmex.com Review – Closed! Problems at a once popular site

Medsmex.com is an online pharmacy tracing its beginning in 1999, and is located in Mexico. Although the site is relatively simple, I have noticed that this one is secured by Norton, which I see seldom in other sites. Medsmex.com is a site by a real pharmacy/corporation, Medications Mexico S. de R.L. de C.V., and all the products being shipped by this site comes from its own pharmacy, and goes through proper customs inspection, contrary to the notion that they are just being smuggled illegally in the border.

This site, Medsmex.com, is selling FDA-approved medications, which are either brand-name or just generic. According to the website’s information, clients do not need prescriptions to order from this site, but are vended to upon the assumption that the clients will only use the meds for personal use. This online pharmacy also states that it does not employ any pharmacist for the site, so the operators will not give advice on which medication to take, or the dosages of the meds to be bought by clients. So clients should be able to consult their respective GPs for medical advice prior to ordering for proper dosages and other drug information.

Products are listed by letter which they begin with, and not by medical category as is the usual thing in other sites. There are numerous products in Medsmex.com, and there are more which are unlisted, so clients can request the unlisted ones that may be found in the site’s physical pharmacy. Regarding the ones I am particularly concerned with—the ED meds, I have found several available variants in the site. The cheapest that I’ve found for Sildenafil (Generic Viagra) is $49.08 for 10 tabs of the 50 mg variant. The brand-name variant is available too (Viagra by Pfizer), and is sold at $114.77 for 4 tabs of the 100 mg type. As for Tadalafil, there are no generic variants available in the site. Medsmex.com only has Cialis by Lilly, and the cheapest it sells the meds for is at $148.52 for 14 tabs (5 mg).

As for the shipping rates, Medsmex.com charges $24.95 for the Express shipping (regardless of order quantity), and it takes about 7-30 days of waiting for the orders to arrive. The company takes credit cards (Visa, MasterCard, Discover), E-checks, and Money Gram payments. With regards to refunds, the company gives clients 100% refund for their orders in case they are not received, and the company can also provide reshipments in case the clients want to reorder succeeding to the non-receipt. 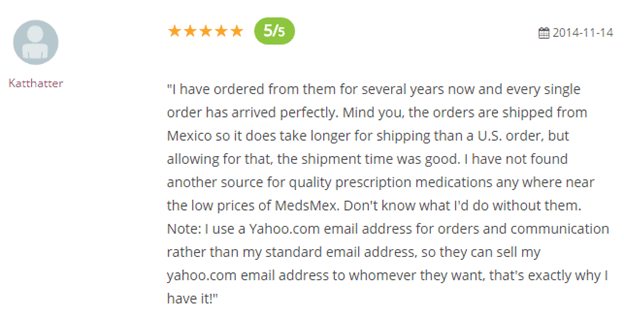 There were reviews for Medsmex.com from www.reselleratings.com. Most were positive, but I have noticed a 1-star review posted by Fredstone last April 6, 2013. The client told in his review that the site is a scam. According to him, he was sent Uprosol capsules even though it wasn’t his order. He emailed the site but the mails weren’t answered.

Despite the negative review, the site was given 5/5 stars by the more recent reviewers. Katthatter (posted November 14, 2014) told in his review that he has been a client of the site for several years, and the site was able to deliver every single time, and always “more than good”. The client also told in his review that Medsmex.com has the lowest prices among all the online stores that he came across.

Another more recent review about Medsmex.com (May 5, 2015) posted by Jdice related that he was a client by the site for over 10 years, and attested to receiving his orders always. According to him, his orders were always complete, customer support is always present to answer queries, and that he never got a single bad order from the site.

Although there was a single bad review, I think that the more recent and excellent reviews have more bearing, since these are more recent accounts of clients, as compared with the complaint dated 3 years ago. Though the negative mustn’t be ignored, it would not be the sole basis for the site’s integrity. I always go for the more recent accounts, regardless of content (either positive or negative). 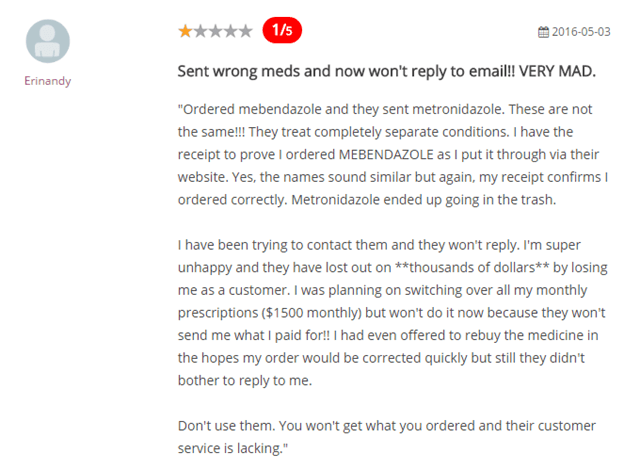 Like I have said, I always go for the more recent reviews, regardless they are good or bad. As with Medsmex.com, I have found recent client accounts regarding their orders, and I was ultimately displeased with what I have read.

BillTempo (posted Feb. 1, 2016) rated Medsmex.com 1/5 and told in his review that the site was a scam. He ordered meds worth $236 and was sent a bunch of pregnancy pills. When he placed his order, he was put-off until about 2 weeks later, and then told that his order isn’t available. The client did not mention the site doing anything about the mistake in sending his order.

Another furious customer, Erinandy (posted May 3, 2016) gave the site a rating of 1/5. This buyer was also sent wrong medication by the site. He tried contacting the site, but to no avail. The client even offered re-purchasing the wrong meds, but the site did not bother to reply to any of his emails.

Although the rating of Scam Adviser for this site is higher than the average (63% safe), I don’t think that I am encouraged to order from this site. The recent reviews prove that the site’s recent service is bad; even if the clients were able to receive something from Medsmex.com, what they received were definitely not their orders. It was bad enough receiving wrong orders, but the site did not even bother to apologize or correct its fault, adding more insult to injury.

There were coupon codes found for Medsmex.com, which were offering 30% to 40% discounts for the products offered. I tried checking on the coupons recently to see their fine-prints, but unfortunately, these coupons do not exist anymore.

Do NOT follow this link or you will be banned from the site!