Worldpharmazone.net, as its info suggests, is the “leading health service pharmacy” which sells only products from FDA-approved and reputable companies. The pharmacy has been in operation for more than a decade and is supplying meds from India.

It was already stated by Worldpharmazone.net that it sells only FDA-approved meds from manufacturers in India. There are many products found on the site which are namely for pain relief, erectile dysfunction, premature ejaculation, weight loss, and women’s health. It also sells medicated eye drops and supplies Modafinil (a Nootropic drug/smart drug) for its clients.

Most of the meds found on Worldpharmazone.net are Rx medications, but it does not necessitate clients to show submit prescriptions for their orders. But I personally think that clients like me should just get checked first before ordering Rx meds, as these meds were made prescriptions for a reason. Clients should take all Rx meds under medical advice, as these meds may have the potential for harm when not taken as they are intended.

Worldpharmazone is based in India, so I reckon even from the start that the meds are all generics and from well-recognized ED manufacturers such as Ajanta, AuroChem, Cipla, and much more. ED products found on the site were indeed from these drug makers; and since meds were sourced from these labs, the prices are awesome. Sildenafil 100 mg, for instance, costs only $45 here and for 30 tablets already. Tadalafil in 20-mg is sold here for only $55 for 30 pills, and Vardenafil is sold here at $45 for 30 pieces of the 20-mg pills too. The minimum quantity for ED orders is 30 pills, but there is no minimum order amount.

As for the shipping, Worldpharmazone only ships the orders via EMS Courier delivery and charges clients $22 on every shipment. Orders will only take 7-12 days to reach their destination countries. Worldpharmazone.net is able to reship orders which were Customs seized, lost, damaged, and orders with no status from the tracking site within 10-15 days. 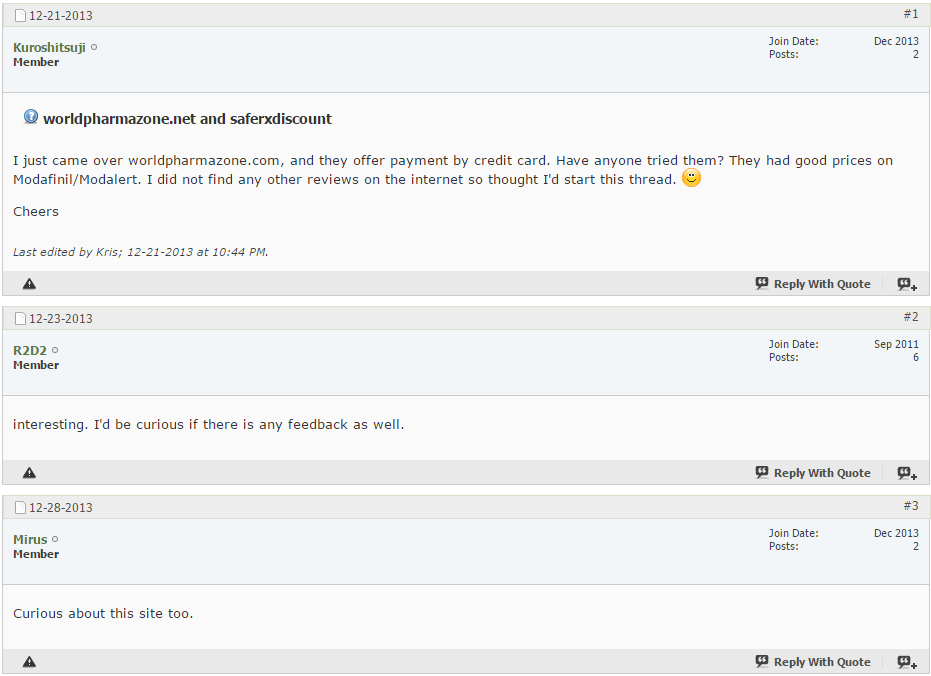 But browsing through the thread, I was able to find a review from a client attesting to have ordered from the site a few times. According to Berimman (July 2015), he was able to order from Worldpharmazone.net and he received his orders every single time; although there was a time that Customs seized his pakage but the site was able to reship.

I was also able to find a single client review on Pharmacyreviewer.com for Worldpharmazone.net for the current year. Pwoodyz21 (posted Feb 2016) told that he was able to purchase from Worldpharmazone.net and was able to receive his order fast. He commended how the meds were packaged properly, and that the Tramadol he ordered was in fact, authentic. He recommends the site to all the other clients.

Also, aside from having a low trust rating, Worldpharmazone.net was also included in the Rogue pharmacy list, and also had malware reports associated with it.

Seeing the 10% offer from Worldpharmazone.net, I instantly searched the site for the promo’s fine-print. Unfortunately, that was just a banner, and there was no link to the details for the 10% free pill offer.